The Role of an Official/Referee 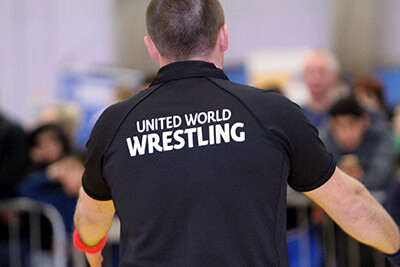 Wrestling officials must be able to bring control to chaos, understand fairness, promote safety and encourage good sportsmanship. A sports official should also have the following positive characteristics of a police officer, lawyer, judge, accountant, reporter, athlete and diplomat. They are also someone who can be put in a position of authority and handle that responsibility without being overbearing.

Along with the rules of wrestling, as an official you must fully understand your role before, during and after the match has ended.


What is expected of you as an official?

Being an official is an extremely important role in any sport. Without officials giving up their time, most sporting competitions would be unable to function. Officiating can be challenging, and unfortunately some officials are subjected to hostile behaviour by participants, spectators and others. They need to be able to perform their role in a positive manner and block out the verbal comments from spectators.

Each official becomes the 'face' of officiating at competitions. People often judge all officials by how an individual official behaves, which means that all officials need to behave in a professional and responsible way. It is important that officials present in a manner that portrays officiating in a positive and respected manner.

Officials undertake an important role in the staging of competitions. They provide leadership and guidance to participants, and ensure that the competition is conducted in a safe and fair manner. Qualities such as integrity, honesty, trustworthiness and respect are integral to the role of the official. This includes how they behave and relate to others prior to, during and after competition, how they present themselves as an official, and how they go about their role. Officials are responsible for their actions and attitudes. People expect the official to be a person they can trust to control the competition.

There are a number of expectations of officials including:

It is important to remember that the match in which the official is officiating is the most important match that day to those participating in it.

The physical requirements of an official will vary from sport to sport and within a sport. Some sports require officials to be very active ( wrestling, rugby, basketball), while others less so (volleyball, athletics, rowing). Adopting a healthy lifestyle will contribute to all officials being in an appropriate physical condition.

Officiating in wrestling will require additional physical preparation that is appropriate for our particular sport. The more active officiating roles require a level of physical fitness that will allow the official to achieve correct positioning throughout the competition, make good decisions, and officiate the competition in a non-distressed physical state.

A competition or match is all about the wrestlers and athletes. You are there to ensure everyone abides by the rules and ethics of the match so that everyone gets the most out of it. Although an integral role, it’s not about you – without the participants there would be nothing to officiate.

Speak to other officials, coaches and/or wrestlers to see what they think of your performance and what suggestions they may have for areas for improvement. Use a mentor in a structured way – ask them if they are willing to work with you over time to improve your performance.

Record and review your performance so that you can see what others see. Look for areas of success and areas for improvement and then make a plan to work through any issues identified.

Have a basic questionnaire ready to hand out to coaches and spectators who you think would give you honest and practical feedback. Ask them to rate your performance from 1 (low) to 10 (high) using questions such as: